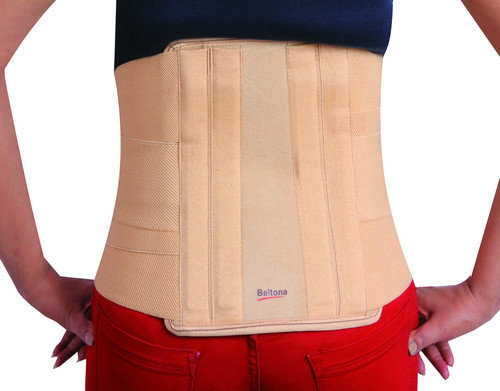 Back belts, or lumbar support belts, are generally lightweight belts worn around the lower back to provide support to the lumbar. Industrial back belts tend to be similar to weight lifting belts or special belts used in medical rehabilitation therapy. Back belts are popular among workers across a number of industries—airline baggage handlers, warehouse workers, grocery clerks, etc.—specifically to prevent lifting injuries.[2]

The theory underlying the use of back belts is that the belts reduce forces on the spine, stiffen the spine, or increase intra-abdominal pressure. Research has yet to demonstrate the efficacy of back belts in preventing ergonomic injuries., although some research has suggested that back belts may have some effect in stabilizing the spine when lifting objects. In some cases, workers expose themselves to greater risk of injury, believing that the back belt is providing extra support and protection.

BACK BELTS–Do They Prevent Injury?

The National Institute for Occupational Safety and Health (NIOSH) is part of the Centers for Disease Control and Prevention (CDC) within the Department of Health and Human Services. NIOSH is the federal Institute responsible for conducting research and making recommendations for the prevention of work-related injuries and illnesses.

What Is the Purpose of This Pamphlet?

Back injuries account for nearly 20% of all injuries and illnesses in the workplace and cost the nation an estimated 20 to 50 billion dollars per year. The National Institute for Occupational Safety and Health (NIOSH) believes that the most effective way to prevent back injury is to implement an ergonomics program that focuses on redesigning the work environment and work tasks to reduce the hazards of lifting.

However, in response to the increasing human and economic costs of back injury, companies have implemented numerous other measures, either in conjunction with or in place of sound ergonomics programs. For instance, there has been a dramatic increase in the use of industrial back belts.

The decision to wear a back belt is a personal choice; however, NIOSH believes that workers and employers should have the best available information to make that decision. This pamphlet outlines the current state of scientific knowledge on back belts and stresses the importance of an overall ergonomics program. Companies should not rely on back belts as a “cure all” for back injury, but should begin to undertake prevention measures which reduce the risks of lifting tasks.

Do Back Belts Prevent Injury?

In recent years, there has been a dramatic increase in the number of workers who rely on back belts to prevent injury during lifting. Back belts, also called “back supports” or “abdominal belts,” are currently worn by workers in numerous industries, including grocery store clerks, airline baggage handlers, and warehouse workers. As their use has risen, NIOSH has increasingly been asked for advice on back belt selection. In response to these inquiries, the Institute decided to address a more fundamental question. Rather than ask “Which belt will best protect workers?” NIOSH researchers began with the question–“Do back belts protect workers?”

Employers relying on back belts to prevent injury should be aware of the lack of scientific evidence supporting their use.

A Lack of Scientific Support

After a review of the scientific literature, NIOSH has concluded that, because of limitations of the studies that have analyzed workplace use of back belts, the results cannot be used to either support or refute the effectiveness of back belts in injury reduction. Although back belts are being bought and sold under the premise that they reduce the risk of back injury, there is insufficient scientific evidence that they actually deliver what is promised.

The Institute, therefore, does not recommend the use of back belts to prevent injuries among workers who have never been injured.* If you or your workers are wearing back belts as protective equipment against back injury, you should be aware of the lack of scientific evidence supporting their use.

* Because the Institute’s primary focus is on the prevention of injury, NIOSH did not address the use of back belts as medical treatment during rehabilitation from injury.

How Did NIOSH Come to These Conclusions About Back Belts?

NIOSH systematically reviewed published peer-reviewed scientific literature on back belts to determine if they actually reduce the risk of back injury. Because there were few studies on the association between workplace use of back belts and injuries, NIOSH also reviewed studies of the relationship between back belt use and forces exerted on the spine during manual lifting. In other words, much of the existing research is based on theories of what causes back injury, rather than on the actual rates of workplace injury with and without back belt use.

For a detailed technical report on the studies NIOSH reviewed, Orthopedic Belt BD, call 1-800-35-NIOSH to request “Workplace Use of Back Belts: Review and Recommendations” (Publication No. 94-122).

What About the Claims That Back Belts…

Reduce internal forces on the spine during forceful exertions of the back?

Increase intra-abdominal pressure (IAP), which may counter the forces on the spine?

Stiffen the spine, which may decrease forces on the spine?

Remind the wearer to lift properly?

Have reduced injuries in certain workplaces?

While all of these claims have been put forth as support for the use of back belts, they remain unproven. There is currently inadequate scientific evidence or theory to suggest that back belts can reduce the risk of injury. Moreover, even if back belts produced the biomechanical effects listed above Orthopedic Belt BD, there is no proven link to injury prevention.

NIOSH searched the peer-reviewed literature for studies investigating these claims and evaluated the scientific evidence they produced. A summary of the findings is provided on the following pages.

Get Nebulizer Machine from us.