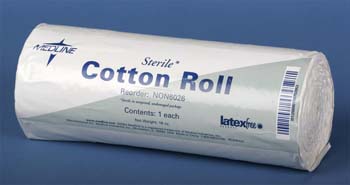 Use of cotton for sanitary purposes likely dates back to its domestication. There is evidence that toilet paper, made in part of cotton and/or other plant fibers such as hemp, Cotton Roll BD was used at least as early as 589 AD in China.[5][a] Cotton balls have been used for applying gold leaf since at least as far back as 1801. An artists’ manual from that year recommends using a “squirrel’s tail, or cotton ball” to press the gold leaf into place. There is some evidence that they were being mass produced as far back as 1816, namely an advertisement taken out of the New York Evening Post by Palmer, Nichols & Co. for many different kinds of fabric and products made of cotton which lists “Cotton Balls” as an item for sale. In 1891 The Laredo Times ran a story about women who put cotton balls in their cheeks to make themselves appear less thin. An 1898 patent by Jerome B. Dillon for a new type of umbilical bandage used an “antiseptic, absorbent cotton pad” to carry out its function.

In 1937, Joseph A. Voss invented a machine which unraveled rolls of cotton and cut them at a fixed interval into cotton pads, starting the widespread consumption of cotton balls and pads. Cotton Roll BD, Companies producing cotton balls took out ads in newspapers as early as 1948 to promote their uses to the public. In 1965, the Opelousas Daily World reported that the sanitary cotton industry in the United States was worth US$60 million (US$460.4 million in 2016 CPI–adjusted dollars). Around this time, there was industry concern that sanitary products using nylon, labeled as cotton balls, were going to crowd out cotton balls actually containing cotton, harming cotton-exporting regions. In 1986, Johnson & Johnson, a manufacturer of cotton balls, published advertisements stating that “doctors advise” cotton balls over “synthetic puffs”. By 2013 however, most consumer cotton balls and pads outside of specifically labeled “100% Cotton” organic brands contained mostly polyester and only nominal amounts of cotton.

In 2015, Mass Market Retailers, a supermarket and chain store trade magazine, estimated that combined sales of cotton balls and pads in the United States were US$177.7 million for the year 2014, down from US$343.1 million in 1999. The change could be due to increases of sales of cheaper store brands: in 1999, only 50.1% of sold cotton balls were store branded, versus 88% in 2014. The top three cotton ball brands in the United States in 2015 were Swisspers (manufactured by U.S. Cotton), Swiss Beauty (U.S. Cotton), and Cotton Cloud (Wabbit, Inc.). Get oxygen cylinder from us.